Dol Jatra on Dol Purnima 2021: An Auspicious Date to Celebrate Festival of Color 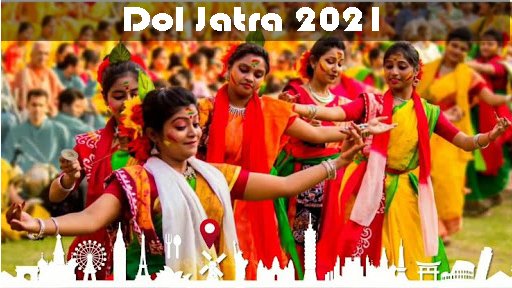 Dol Jatra is one of the Bengali community’s notable festivals, which is widely known as the festival of colors or Holi. The most vital ritual for Dol Jatra is Holika Dahan that gets celebrated a day before Holi due to the full moon as a sign of win over evil. The Holika Dahan day is also known as the Dol Purnima. Dol Purnima 2021 Bengali date is March 28; thus, Holi is on March 29. Holi is one of the notable festivals of Phagun month by the Bengali calendar; thus, it is also known as Spring Festival or the Phagun Utsav.

Dol Jatra is one of the notable festivals of the Bengali community; however, the festival gets celebrated in various corners of the country in different ways. You will observe your locality getting filled with colors few days before the Holi fest. There is a specific timing that everyone has to maintain as the puja has some rituals to follow. Furthermore, the importance and the auspicious date and timing to celebrate the holi festival 2021 are:

Dol Jatra and Dol Purnima is one of the notable festivals of the Bengali community that has a mythological significance with the community. Holika Dahan is the crucial ritual as it symbolizes the victory of good over evil; therefore, people make the Holika burn to celebrate the win.
In Bengali mythology, an evil king named Hiranyakashyap wanted to rule over everyone, although his son refused to do so, who was a follower of Lord Vishnu. Thus, the king asked his sister to take his son to the fire; however, Prahalad, son of Hiranyakashyap, did not get a scratch in the fire. Hiranyakashyap’s sister got burnt in the fire, and from that time, the festival gets celebrated for Lord Vishnu.

Therefore, to symbolize win over evil, people celebrate this festival. They make Holika and burn it at a convenient stage and start the occasion of Chotta Holi from there. You must consider the oldest person of the family to set the fire on Holika if you plan to keep the event at your house.

Holika Dahan is the most vital event for Dol Jatra that needs to be done before the day of Holi, which has to a Dol Purnima, a full moon day. It is one of the crucial rituals that symbolize the victory of good over evil. In this ritual, people burn the Holika to celebrate the victory of Prahlad over his father’s sister in the fire. Thus, the ritual has a specific time duration during which it needs to be done.
Dol Jatra is mainly celebrated as the symbol of win over evil; however, in many places of the world, the event only happens as a symbol of happiness. However, in India, it happens on the very next day of the Holika Dahan ritual; thus, Holi is on March 29 as March 28 is the date for Dol Purnima. Furthermore, it will help if you take the help of different business portals for more relevant information.

The Timing Of Dol Jatra And Dol Purnima

Dol Jatra and Dol Purnima is one of the crucial rituals of Phagun month by the Bengali calendar; thus, it needs to get celebrated by the end of March. Holika Dahan is the most vital ritual of Dol Jatra that needs to get celebrated at the exact time. In 2021 Dol Purnima is on March 28; thus, it will be the Holika Dahan day, and Dol Jatra will be on March 29. However, the exact Holika Dahan time, 2021, is from 6:54 pm to 9;14 pm, an exact of 2 hours 20 minutes, and the Purnima Tithi will start at 3:27 am on March 28 and will continue till 12:17 am on March 29, 2021.
Furthermore, it will help if you contact the business directories of the country as they are at your service all the time for more relevant information. However, it is recommended that you complete the ritual on time as per the rules of the ritual.

Time For A Wrap

Dol Jatra is a notable festival of the Bengali community, which gets celebrated all over the country. It has various other names according to the states of the country, such as Chota Holli. Dol Jatra mainly happens on the Phalgun month according to the Bengali calendar on a full moon day which is considered as the Dol Purnima. This year, Dol Jatra will be on March 29 as Dol Purnima will be celebrated on March 28 as it is a full-moon day.
Furthermore, for more relevant information about the festival of colors, it will help if you contact the existing business portals of the country as these business portals have efficient members at your service all the time. However, for more information on Dol Jatra date and timing 2021, you can take the help of the search engines of these business portals as they have updated search engines with the current list of information.

Dol Jatra is one of the notable festivals of India; thus, you can consider this blog to know the relevant information regarding the festival of colors.